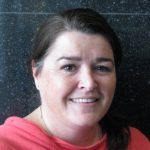 Angela graduated from The University of Western Ontario with a Bachelor’s of Science Degree Biology in 1990 and attended Fanshawe College’s Respiratory Therapy program, graduating in 1992. Angela started working as a therapist at Toronto Western Hospital in 1992 and has held numerous positions within the RT department over her years at UHN. Angela has been a Practice Leader within the TWH RTD since 2012 specializing in critical care and complex continuing care.