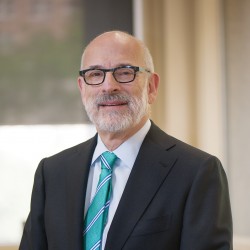 Serving on the Board since 2010, Dr. Edward Cole was appointed Physician-in-Chief, University Health Network and received the Dr. Charles H. Hollenberg Chair in Medicine at UHN in May 2010.

He received his Bachelor of Science and Master of Science from the University of Toronto in 1972 and 1973, respectively, and his M.D. from Memorial University of Newfoundland in 1975. Following four years of post-graduate training in internal medicine and nephrology at the University of Toronto, he received a Medical Research Council of Canada Fellowship for work in the laboratory of Dr. Curtis Wilson at the Research Institute of the Scripps Clinic that focused on glomerular immunopathology. He has been a member of the Faculty of Medicine at the University of Toronto since 1981, having worked at the Wellesley Hospital until 1984, St. Michael’s Hospital until 1992, and is presently a staff nephrologist at the Toronto General Hospital.

In 2001 Dr. Cole was appointed as Director, Division of Nephrology, University Health Network & Mount Sinai Hospital and in 2007 became the Amgen Professor of Nephrology. He is currently Professor of Medicine and, from 1996-2006, he was the Director of the Division of Nephrology, University of Toronto. He is founder and Chair of The Canadian Transplantation Society Kidney Working Group and Chair of the Steering Committee for National Kidney Registries. His major research interests are in immunosuppressive drugs and clinical trials in renal transplantation with over 130 publications.