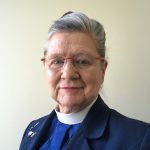 NOLA CREWE was educated at the University of Toronto where she received an Honours B.A. in Women’s Studies and History; an M.A. in History; a J.D. and her M.Div.

After 20 years as a practicing lawyer and 8 years as a Toronto Board of Education Trustee, Nola is now an ordained Anglican Priest, Chaplain at Mt Sinai Hospital and the Rector of St Monica’s Anglican Church.  At Mt Sinai her time is divided between the ICU and Women’s & Infant’s Health, and attends all Codes Blue, Pink and 77.   Her particular interest is in consent and capacity and the differing interpretations by lawyers and doctors.

A widow, Nola is the mother of five, grandmother of nine and great-grandmother of one.  Her spare time and passions are largely occupied by the OSMTH – the Knights Templar — a Christian charitable group, of which she is the Canadian Grand Chancellor.  Their special interest lies in the protection of Christians in the Holy Land.